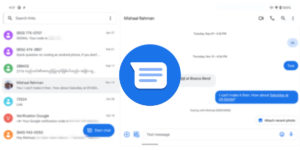 Google continues to show a focus on maintaining and developing the capacity of the Google Messages app. In an APK teardown, XDA developers found some interesting code snippets suggesting another new feature is coming soon. The feature we’re referring to is “nudges” similar to that which Gmail already offers. This reminds you to follow up […]

The post Google Messages will soon be able to “nudge” you to respond to texts appeared first on Ausdroid.