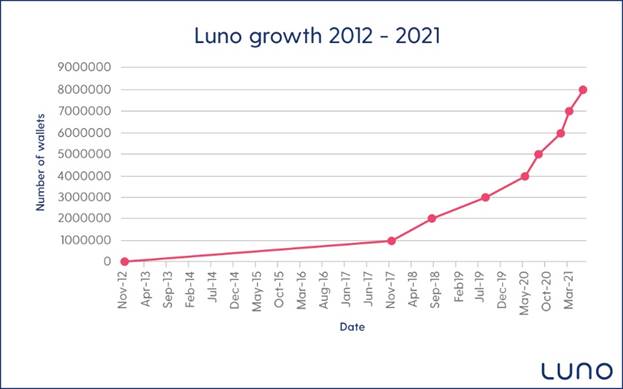 Luno, the leading global cryptocurrency company on a mission to upgrade the world to a better financial system, today announces it has hit 8mn customers (wallets), with 1mn added in just 12 weeks.

This follows an earlier announcement in April after it reached seven million customers in just seven weeks.

With a major surge in customers from 4mn in December 2020 to 5.1mn in May 2021, Africa accounts for Luno’s largest user base and the platform’s recent figures reinforce the huge appetite for cryptocurrencies across the continent. Last month, the platform announced it recorded trading volumes of $7bn in Africa alone and installs of the Luno app have soared by 271% on the continent since January 2020.

Speaking on Luno’s thriving traction in Africa, Marius Reitz, Luno’s General Manager for Africa, said that Across Africa, they are witnessing a huge wave of retail investors step into the crypto market for the first time, adding that it is potentially due to easier access or the lower minimums required to purchase crypto.

“However, this isn’t just a trend that’s been taking off in Africa, it’s something that’s being replicated across all of our emerging markets but what sets the continent apart is a rapidly growing awareness of how crypto could be the ideal solution for Africa’s unique challenges.”

“Our research last year found 54% of Africans are ready to adopt a global digital currency compared to 41% in Asia and 35% in Europe. This growing demand stems from an understanding that crypto can effectively solve major problems in Africa such as volatile currencies, costly payments and high inflation.

At Luno, we believe the core utility of cryptocurrencies to address these issues not only has the potential to completely upgrade Africa’s financial system but will be a key driver in transforming cryptocurrencies from a niche technology to an essential feature of everyday life for all Africans.”

Luno’s global business has also grown rapidly due to the simplicity of its online and mobile platforms, offering education, bank-grade security and self-regulation. It is actively working with regulators and banks to safely increase access to cryptocurrencies.

In recent months, the platform has launched a host of new products and features for its global user base. Earlier this year, Luno announced the launch of USDC – arguably the most secure stable coin on the crypto market known as the “digital dollar”.

Pegged to the US dollar, it marks a major breakthrough specifically for African users through not only enabling them to hedge against the volatility of local currencies but also delivering an upgrade on the functionality of the US dollar by being faster and easier to move across the world.

In March this year, Luno also launched USDC on its Savings Wallet alongside Ethereum, delivering a fresh opportunity for its users to earn up to 7.6% and 4% interest respectively on both coins.

With Luno users already afforded the opportunity to earn up to 4% on their Bitcoin savings, the launch marked the latest drive from the company to deliver alternatives for customers looking to make meaningful savings on their money.